"Do you now what my favourite renewable fuel is? An ecosystem for innovation.  -Thomas Freidman" 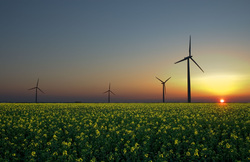 Renewable energy is a form of energy that can be obtained from a natural resource that will never run out. With the world's heavy reliance on fossil fuels taking its toll, renewable sources of energy have begun to gain popularity and are a common thing to see in everyday life. Some common types of renewable energy are solar, wind, hydro and biomass. They all have their strengths and weaknesses, so choose your source wisely!
SOLAR ENERGY-
Solar energy comes from the light or heat produced from the sun's rays. This form of energy is converted into electricity through the use of solar panels. A major plus of using solar power is that it provides you with free electricity that releases no pollution-this is fantastic for the environment! Zero pollution means the amount of problems linked to climate change would decrease, and the world would be an overall healthier place to live in. However, the installment of solar panels and the payments of the panels themselves is often quite expensive. Some people may say that they spend more money on the panels than what they will save from using the free electricity they provide. Even though using solar panels is a smart step towards saving the environment, the monetary demand may prove to be non-worthwhile. This means getting the world on board with using this source of renewable energy may be a wee bit difficult.
WIND ENERGY-
Wind energy is obtained by using wind turbines or wind mills. The wind turbines consist of a tall poll, around 20 metres in height, with a rotor (3 blades) attached to the top. The wind spins the rotor which, in turn, spins a coil of wire that passes a magnet. This generates AC  electricity through the wire, but is converted into DC  electricity to be used safely. Wind turbines, along with solar panels, do not produce pollution, so they contain no risk of rising the atmosphere’s temperature. However, wind mills aren’t very reliable as the wind does not blow consistently. The wind must be blowing at a speed of 5m/s to be worth having. Also, wind mills need to be placed in some kind of valley in a spacious area for the wind the properly move the rotor.
HYDRO ENERGY-
Hydro power comes from the use of water and turbines. When water rushes and flows over turbines that are connected to a generator, they spin and generate electricity. Hydro power has a positive impact on the environment as it is not producing any greenhouse gases and there isn’t any waste to get rid of. Hydro plants are reliable and efficient machines because water never stops running. One of the major downsides of using a hydro plant is that if it is built in the wrong place, it may damage and disrupt the ecosystems living in the area. Also, water is a finite source, so a hydro plant probably wound’t be the best way to obtain electricity during a drought when  there is not enough water to fulfill the needs of humans  and animals, as well as supply electricity.
BIOMASS-
Biomass, also known as ‘biofuel’, is the form of energy that can be obtained from plants and animals. Plants contain stored energy, which, when burned, can then be used by humans. Through as process called ‘photosynthesis’, plants absorb energy from the sun. These plants are then burned and the steam and heat released is the energy which humans use. Biomass can also be obtained by using the methane produced by rotting plants, animals and other organic matter. Crops, like corn and sugar cane, can be converted into ethanol, a biofuel. Ethanol is a clean, efficient alternative to gasoline. However, when biomass is burnt, carbon dioxide previously absorbed by the organic matter is released into the air. This would mean that biomass isn't entirely clean, but luckily the plants that have not been burned will absorb the carbon dioxide, and the cycle will begin again.

Making a difference isn't hard, just take it one solar panel at a time!